Monitoring, key to performance when working from home

Do you monitor what should only work when everything else fails? 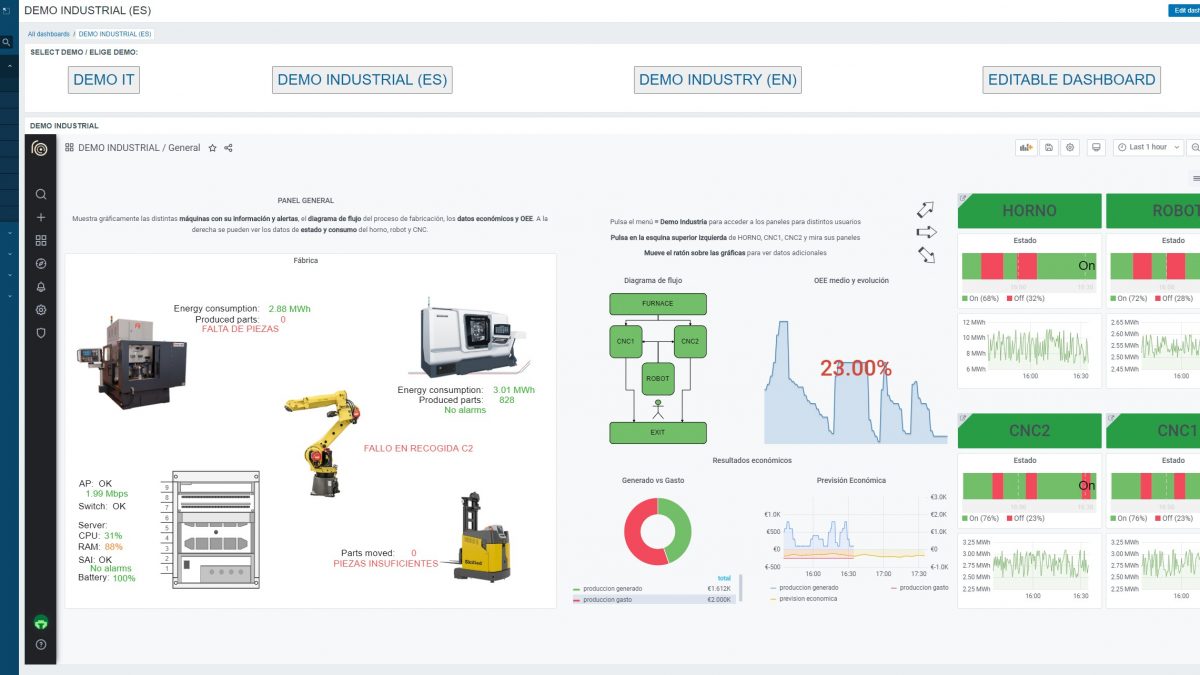 Muutech upgrades its platform Minerva to Zabbix 5. What are the improvements?

Within our monitoring platform, we integrate many open-source tools along with our own technology, and one of the most import is Zabbix. Therefore, we are always aware of the updates of the tool to take advantage of all the new features it has. In this case, Zabbix has updated to version 5.0, which incorporates important changes and many improvements both in functionality and aesthetics, in this article we will tell you all.

Already incorporated in version 4.4, Zabbix people continue with its development, offering from now on, official support for the newest agent. For the time being, they will continue to offer support for both the old and the new agent. Although it is expected that in the future the last version rewritten in GO will replace the previous one.

Among the improvements included in this new agent for version 5.0. Without a doubt, we emphasize the addition of the possibility of adding a data buffer. This will allow to keep on saving data in the same way that a proxy would do it in case of losing the connection with the main server. That is, even if the server is down, the agents could keep on collecting data and keep them in the disk, until it is recovered and they could be sent all together.

A very important part of any monitoring platform, are the alerts. Having the data, is very useful, but if we can find out in real time about any problem, without having to be watching the graphs 24 hours a day, it will be much better.

Normally, they are done through email, but with the explosion of messaging applications, it is usually more useful to send the alerts to a shared group that you can consult more comfortably from your phone.

Zabbix 5 adds support for the most popular messaging applications such as Telegram, Slack, Discord or Microsoft Teams.

Speaking of alarms. In this new version, the possibility of comparing text values is incorporated in order to trigger them.

Until now, there was no native way to compare the text of two variables. For example, to check if two machines are in the same version. Instead, in Zabbix 5 it is available natively, which will greatly simplify the process of generating alarms.

Security is one of the points that Zabbix has emphasized most for this version. One example is that from now on, Zabbix supports encryption with the database from the frontend. This way you can avoid that your private data is discovered in case of an attack.

Following the same line, Zabbix has also implemented the possibility to configure macros to store secret data such as passwords, tokens and other data that could be dangerous. It should be noted, that if you use such macros, when exporting a host that contains them, those data will not be exported.

Also within the safety part, SAML is a new addition. It will allow the creation of an SSO, an authentication procedure that enables a given user to access several systems by logging in only once. SAML support allows immediate integration of Zabbix with various vendors such as Microsoft ADFS, OpenAM, SecurAuth, Okta, Auth0 and many others. Minerva already supports SSO for a few months back.

Another of the most important and widely used points of Zabbix, is the pre-processing. For those who are not used to using it, this is a series of steps that can be executed within an "item" once they receive data and allow actions such as regular expressions or mathematical calculations.

One of the changes in the preprocessing that accompanies the possibility of executing javascript introduced in 4.4, is the possibility of replacing one value by another. This will allow you to map values, remove characters or replace them more easily than with regular expressions.

Another of the changes incorporated in this new version, is the extension of the size of the floating point data type, which will now have more resolution, which may help, in critical situations where data resolution is an important issue.

Zabbix 5.0 supports optional compression of collected data for TimescaleDB. In addition to the general benefits of TimescaleDB (automatic partitioning, performance and scalability), which helps to further improve performance and reduce storage costs.

Thanks to the design modules introduced in Zabbix 5, new functionalities can be created within Zabbix, allowing for infinite configurations that can solve any problem.

The good thing is that, to make these changes, it will not be necessary to modify the code of Zabbix, being much easier future updates without worrying that the new features may stop working.

No doubt, if you have used Zabbix in the past, you have surely noticed its aesthetic change. We'll leave that for the end, because it's not a feature in itself. But Zabbix 5 receives a number of design changes that make it not only prettier, but much easier and more comfortable to use.

According to Zabbix's own manual, the new design of Zabbix makes it also compatible with large screens, which together with the new possibilities for the generation of dashboards, makes it ideal to put it on a big screen and see all your graphics at once.

This is a very big update that is striking just by the visual changes. Moreover, it is an LTS version unlike 4.4, which means that Zabbix people will keep their support for more years, specifically until 2023 for all kinds of problems and 2025 for critical problems. With all this said, we recommend anyone using Zabbix to upgrade. We have already updated our platform Minerva, and you can test it in our demo.
Demo Zabbix 5.0
Share